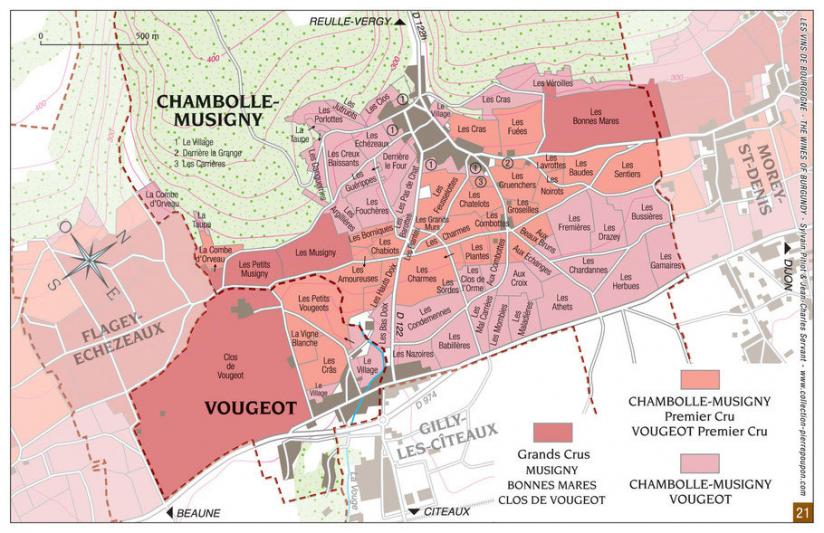 Map of Chambolle-Musigny vines plots and climates, by S.Pitiot and JC Servant
Tasting at Trilogy in Côtes de Nuits held on 11th of March 2019 at Château du Clos de Vougeot

The fifth edition of "Trilogy in Côte de Nuits" was held Monday, March 11 in the large cellar of the castle of Clos de Vougeot. Nearly 80 vine growers from the villages of Chambolle-Musigny, Morey-Saint-Denis, Vougeot and Vosne-Romanée presented the 2017 vintage, and from time to time, some samples of the 2018 vintage.

Nearly a thousand wine professionals (wine merchants, importers, journalists or bloggers, restaurateurs ...) made the trip. Therefore, the traffic in the aisles was sometimes complicated because of affluence, or even traffic jams at some stands, like some events during the Great Days of Burgundy.

About the conditions of the 2017 vintage in the sector, here are some generalities:

This day, several cases presented themselves to the taster:

Within the same domain, one could meet one, two or even the three aforementioned cases.

It was therefore necessary if possible to question the producers and to be proactive in tasting, this questioning was not always obvious considering the crowd.

Some areas, among others, have particularly caught our attention during this event, in different styles and in alphabetical order, including: